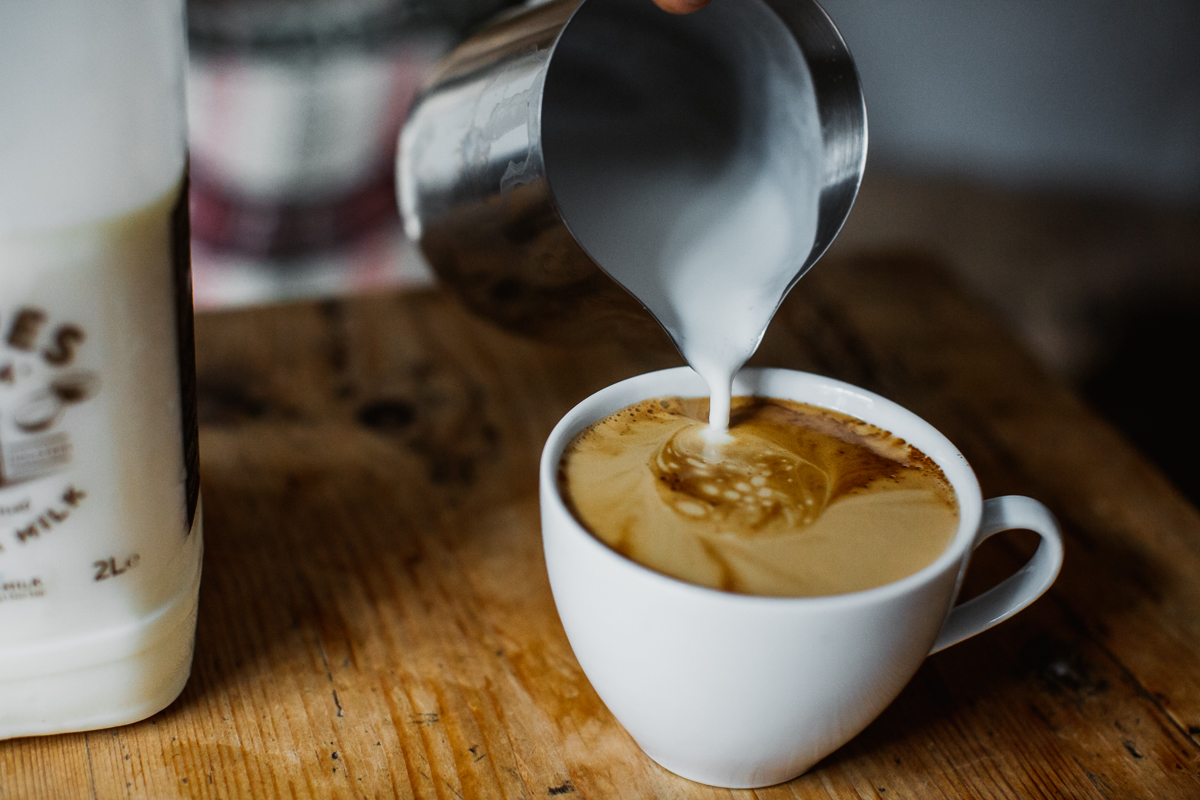 IF THE HEART ON YOUR cappuccino foam looks extra-twirly, you might consider inquiring whether your favorite caffeine purveyor is using the newest tool in the coffee kit: barista milk. Specifically formulated for coffee shops, barista milk’s higher protein content helps create a more stable foam for latte art, and its creamy richness boosts the flavor of the roasted bean. For a global dairy industry that has seen dropping demand for conventional, liquid milk, this is a promising development.

“I think the specialty coffee industry has really upped the ante with the beans and roasting, and so the milk had to follow,” says Joanna Heart, an owner and barista at The Palm Coffee Bar in Burbank, California. “You’re working with this beautiful bean, it’s fair trade, it’s organic, and you’re putting all this effort into it, and then you’re just dumping whatever milk in it? I think baristas began to realize that milk is also something to be researched and played with as an artist.”

Don’t expect to find this milk for use at home. For now, barista milk, which is priced between 30 to 60 percent higher than conventional dairy milk, is exclusively sold to culinary professionals.

“Barista milk is crucial because of the way it behaves in tandem with good, flavorsome coffee to create an overall balance in the drink,” says Joe Towers, who handles the marketing and public relations for Brades Farm, his family’s dairy in Lancaster, England.

Barista milk is rich in butterfat, which takes the edge off the acidity of high quality coffee beans, explains Towers. Brades Farm barista milk contains 4.5 percent butterfat, made by mixing the milk from their Jersey cows (which has a fat content of more than six percent) with that of their black-and-white Holstein-Friesians.

Barista milk also contains more protein, the levels of which are regulated. Most dairies focus only on consistency in fat content (whole milk, one percent, two percent), rather than protein content. “Historically there has been no demand from the consumer for the protein to be standardized,” says Towers. “Well, the barista has become the exception to this rule … They don’t like to constantly adapt their technique to cope with the changes in the protein content of the milk.” Milk protein levels vary as cows’ diets change with the weather. At Brades, farmers mix the milks from their two cow breeds to ensure a standardized percentage of protein.

This combination of high protein and high fat is what makes for longer-lasting latte art. The aeration provided by the hissing steam wand of an espresso machine, followed by a quick swirl to break up large bubbles, creates microfoam. It’s this glistening froth that provides the best canvas for latte art. Barista milk can also be steamed at a higher temperature and still maintain its sweetness because of the extra butterfat and protein. “When the barista heats the milk to make it froth, the protein molecules expand, and they bind to the butterfat, instead of binding to air,” Towers explains. “That makes the pattern stay—instead of air bubbles forming on the surface of the coffee.”

For an industry facing a crisis due to falling demand, barista milk has been an important, if niche, innovation. Americans are consuming 37 percent less milk (in liquid form) today than they did in the 1970s, The Washington Post reports. Globally, too, the troubled dairy industry is only just beginning to adjust. In 2016, Brades Farm was among the first to introduce barista milk to the British specialty coffee market. The farm now focuses solely on producing barista milk, and Towers says the dairy is once again making a profit.

Joanna Heart of Palm Coffee swears by barista milk made by Straus Family Creamery, an industry pioneer from Marshall, California. That said, nearly 70 percent of her customers ask for alternative milks. While consumers may be drinking less cow’s milk, they are drinking more plant-based alternatives, as the Great Oat Milk Shortageof 2018 attests. There are now barista editions of almond, soy, rice, and coconut milk.

In an era of ethically sourced, single-origin coffee beans, there has curiously been little interest in knowing more about the milk poured into expensive lattes (the most popular drink ordered in American coffee shops). That may be changing. “Just the other day, a customer came in and asked if I’d heard about Jersey milk,” Heart says. “I’m like, what’s Jersey milk?”